1. Introduction
2. Requirements to control Homeseer devices with Homey
2.1 Devices & software
2.2 Homey apps
3. JSON to interface with Homeseer
4. Configure Homeseer for remote control with JSON
5. Switching a Homeseer device on and off
5.1 Get the Homeseer server IP address
5.2 Find the Homeseer device ID
5.3 Build and test the URL
6. Create a virtual device
7. Creating the Homey Flow
8. Finally

How to control Homeseer devices with Homey? 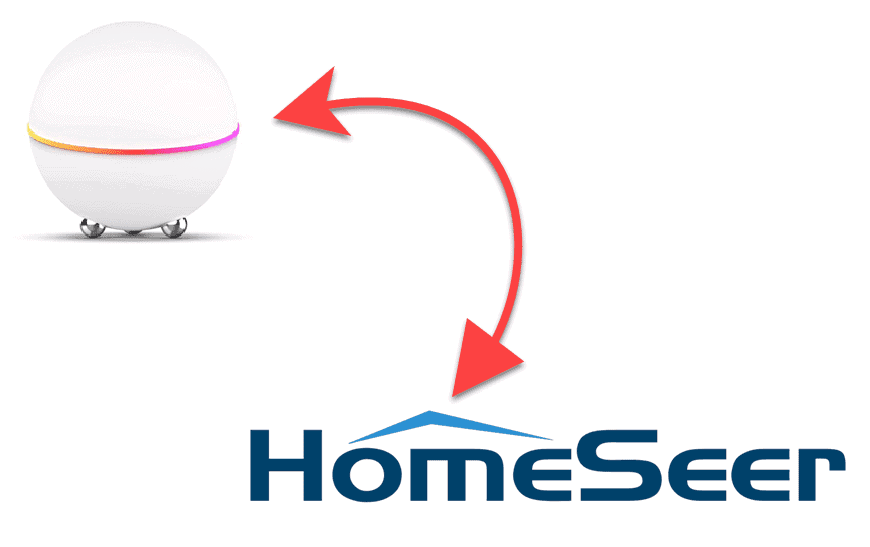 Before explaining how to control Homeseer devices with Homey first some background why we use both Homeseer and Homey to automate our house and garden.

Back in 2007 we bought the domotica software Homeseer to make our first steps in automating our home and garden. Homeseer currently monitors and controls most of our devices as the software is very flexible with a lot of functionality.

Unfortunately it can also be complicated to to setup devices and automate them for people not experienced in the IT world, for example writing scripts. As members of our family also want to automate devices we bought in 2020 a Homey Pro as being a more user friendly home automation hub and still keeping Homeseer for the more advanced home and garden automation.

The following devices and software are required:

The following Homey App must be installed on your Athom Homey:

3. JSON to interface with Homeseer

JSON (JavaScript Object Notation) is a text based data-interchange format that is completely computer language independent. It’s development started in the early 2000s and has nowadays diverse uses in electronic data interchange, including that of web applications with servers.

JSON is an open standard file format and data interchange format that uses human readable text to store and transmit data objects consisting of attribute–value pairs and arrays (or other serializable values). JSON is easy to read and write for humans and it is easy for computers to parse and generate.  It is a computer language independent data format for which many modern programming languages include code to generate and parse JSON-format data. JSON filenames use the file extension .json. For more information see Wikipedia.

HomeSeer devices can be controlled using JSON formatted data.  For Homeseer 3 the relevant information can be found in the HS3 Plug-in SDK (system development kit). For Homeseer v4 the JSON information is available in the JSON API documentation in the HS4-plugin SDK.

Before we can control Homeseer devices with Homey we need to make sure Homeseer is configured to accept remote JSON commands. Go to your Homeseer website and select the menu option Tools | Setup.

Test if the remote control of Homeseer via JSON is working by entering the following URL in a internet browser:

This should show similar output in the browser as:

5. Switching a Homeseer device on and off

As an example how to control Homeseer devices with Homey, we take a Greenwave Powernode power strip (unfortunately not available anymore), which is a Z-Wave device. Each power connector of the power strip can be controlled individually. In our example we want to create a Homey Flow to toggle the power on/off for our Denon AVR, which is connected to one of the six available power outlets of the PowerNode.

For people questioning themselves why we switch off our Denon amplifier completely instead of putting it in standby… Sometimes it was left on quietly for days consuming around 100 Watt/hour. So when we go to bed we tell this Google Home and all not required devices are switched off, including the Denon Amplifier. Saving some energy at the end.

If this is not the case the user credentials needs to be part of the URL:

The following is required to build a working URL when Homeseer and Homey Pro are part of the same network:

5.1 Get the Homeseer server IP address

This is the IP address how you normally access the Homeseer server.

Click on the device link to open the properties page and select the Advanced tab.

On the Advanced screen the Homeseer device ID is listed.

This number will be used in the highlighted part in the URL:

Add the collected information to the URL for switching the device on. It will look similar as:

For switching the device off replace ON by OFF.

Test the URLs; the device should go on or off based on the URL used in the internet browser. If successful the browser will show the properties of the device in JSON format. If not it will show an error message such as for example:

We create a virtual switch, which will be used to switch the power outlet of the Homeseer device on/off via a Homey Flow. 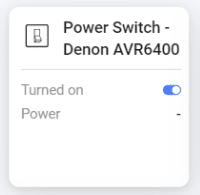 Virtual devices can only be created if the Homey App Virtual Devices has been installed. Add a new device to Homey and select “Virtual Devices”. On the screen shown select “Device”. On the next screen click “Connect”. Enter a device name and click on Next. From the icons shown select the one resembling a switch. On the “Device Class” screen select “Socket”. On next screen select only the capability “ON/OFF”. The virtual device has been created.

As an example how to control Homeseer devices with Homey, we create a virtual switch in Homey to represent the power outlet of the power strip providing power to our Denon AVR. This virtual switch on/off is used as trigger for the Homey Flow we are going to create.

The Homey Flow will perform the following actions:

The Homey Flow created is shown below. Each step is explained in more detail later. 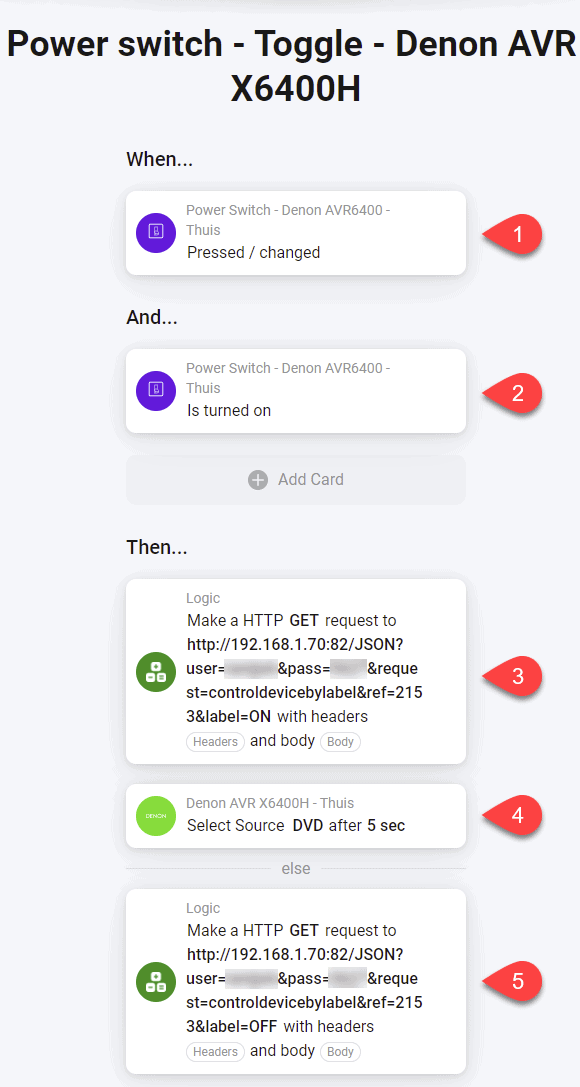 This article should provide a good basis how to control Homeseer devices with Homey. It is also possible to fetch Homeseer device statuses, start Homeseer events etc.