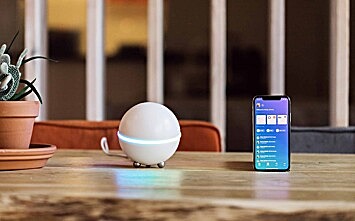 The Athom Homey Pro is a home automation controller manufactured by Athom B.V. based in The Netherlands. It is the base station for your smart home to control devices and collect data from them (for example temperature or energy consumption). The name Homey originates from the English word homey, which in dictionaries is described as pleasant, comfortable, cozy, intimate, informal and inviting. By setting up your own home and garden automation you create your own smart home and smart garden.

And indeed, Homey helps you to make your home even a more comfortable and pleasant place to be by setting up home and garden automation your own smart home and garden.

The Homey device itself is a white sphere-shaped device with a ring of LEDs around the middle (can be switched off).  It stands on its three little chromium legs such that it is slightly tilted towards the front with respect to the LED ring. At the bottom it  has an USB connector for the power and a 3.5mm audio connection.

Between 2016 and 2019 four Homey models have been made as shown in the table below (including the Homey Pro specifications). The first tree were called Homey and the newest one Homey Pro. Both Homey versions share the same housing and chips to control the various communication protocols. The difference is in the processor, available memory, availability of NFC and internal microphones. Both versions are available today.

Compared with the standard Homey, the PRO has a dual core CPU, more memory (allows more apps to run) and no NFC & internal microphone. The microphone on the Pro has been removed as Homey can interface with Google Home And Amazon’s Alexa to enable voice command functionality. NFC has been removed also from the Pro (according to Athom it was hardly used). Finally, the Homey Pro costs 100 euros more in Europe.

Due to the dual core CPU and more memory it is wise to spend the additional 100 euros. The normal Homey can run between 15 and 20 Homey Apps flawlessly (an app requires around 10 to 30 MB). If you install more, the experience might become slow or unresponsive. The Homey Pro can run more than 40 apps. Be aware that each brand of devices requires one app. On top of this other useful apps will likely be installed by you.

Note: Not all of Homey’s memory is available for apps, as some of the memory will be consumed by the operating system, Flows, Insights etc.

Note: this site is focussing on the Homey Pro, but almost all information is also valid for the normal Homey.

A home automation controller should preferably support as many communication protocols as possible, so it can handle many devices from multiple brands. Luckily Homey Pro supports the 7 most common protocols as shown in the table below. Although the table has been setup for the Homey Pro, it largely fits also the normal Homey (which additionally has also NFC).

As you can see in the overview above, Homey does not have a wired ethernet connection (LAN), hence a good working WiFi connection should be available at your home.

The image below shows the internals of a Homey. The red number indicates that this item is not included in the newer Homey Pro. 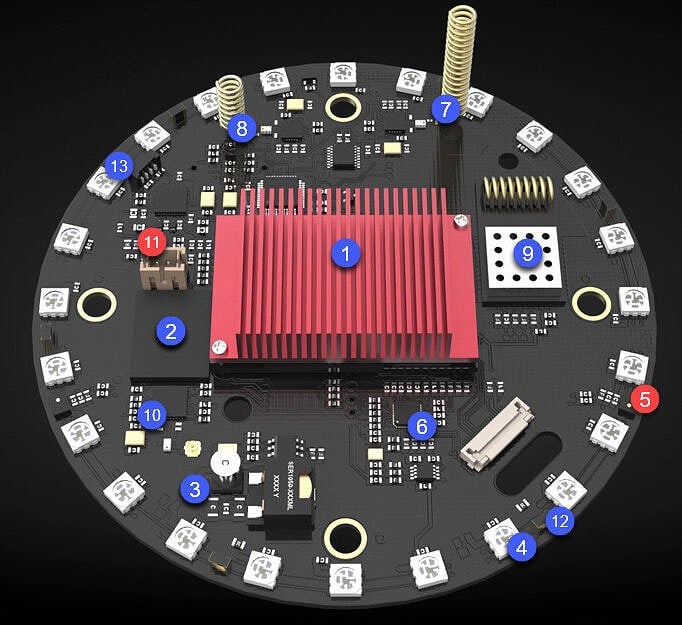 The requirements for a Homey are simple:

And willing to invest time in getting to know Homey. It works more or less out of the box with some configurations. Homey works pretty intuitive for most of the basic functionality. For more complex stuff you need more puzzling and probably some reading on the Homey community or sites like this one. There is no manual available, but there is a lot of info available on the Athom Homey support site.

Do not be scared; most of the basic stuff works fine and provides a lot of fun to improve your dumb home towards your smart home.

5.1. Is an internet connection required?

Homey can be used locally to control your devices, but also relies on the internet for additional functionality available in Athom’s cloud or via other internet servers, such as for example:

This means that Homey’s functionality is relatively limited when there is no internet, but at least the following will work without a internet connection:

So Homey itself is fully accessible locally, and in the improbable event that Athom goes bankrupt and is forced to shutdown the servers, most Homey functionality will still work.

Note: some devices (including most smart thermostats) require Homey to connect to them using the internet (and do not have a local workaround). Homey might not be able to control these devices while offline.

Connecting with Homey goes via WiFi as it does not have an ethernet network cable connection (LAN). It can either be reached via the web or a mobile app (Apple iOS or Android).

Homey, and hence your devices, can be remotely accessed through a secured and encrypted connection to the Athom Cloud via the mobile app or your internet browser.

Homey app for tablet and phone

At this moment there is also a separate web app available, Homey Flow, to create and maintain flows. It is likely Homey Flow will disappear as stand alone app when all functionality is embedded in the Homey Desktop web app.

Example of a Homey Flow card

The Homey controller itself can be extended with apps, the so called Homey apps. These Homey apps can be created by everybody with development skills as Homey is an open system for which the development documents are freely available.

The benefit of this approach is that these apps can be created, updated and installed independently without having to change the Homey device itself. This creates a great environment for developers to expand Homey’s capabilities, which can be seen in Homey’s app store (apps are free) and Homey’s community forum.

The Homey apps can be categorised as follows:

7. What can you do with Athom Homey?

Athom Homey can control many smart devices in your home as it knows 7 different wireless communication protocols, which makes it possible to interface with more than 1000 brands (Philips Hue, IKEA Tradfri, Fibaro, Google Chromecast, Spotify, Sonos, Volvo etc.) covering some 50000 devices. Due to the open platform, support for new devices can be added by suppliers, community developers or even yourself if you have development skills. See for the currently supported brands/devices the Athom Homey app store.

Data provided by the devices is read-out frequently and stored locally on your Homey; ready to be used for automating your home, supporting reduction of your energy consumption or reviewing the performance of your smart home.

Actual captured data can be used to create scenarios based on IF/AND/THEN rules to make your home smarter with Athom Homey. So IF something happens AND/OR certain condition(s) are met THEN take one or more actions. Examples of scenarios you can create:

These scenarios are created with the flow editor and can be started automatically or with a voice command via Google Home or Amazon Alexa. If voice commands are not available you can also use the mobile app to control your devices or start a scenario.

Homey Flow is available inside the Homey mobile app, the standalone web app Homey Flow and as part of the Homey Desktop web app.

Historical data can be exported for own use (for example import into Excel) or visualised in charts with the Homey Insights web app to provide insight in the performance of your smart home. The interactive charts provide options to compare historical data (max 10 years) of for example power usage, temperature and other sensors.

Homey Energy provides a real-time overview of your current energy usage and power generation (solar panels). It supports you in finding energy-hungry appliances in your home. Homey Energy is currently only available in the mobile app, but will also be integrated in Homey Desktop in near future. It allows you to monitor:

Homey Energy supports smart meters, which measure the total usage of electricity and/or gas at your home. These smart meters have been implemented in many countries in Europe in the past years.

Homey Energy groups the devices per zone, which can be zoomed in up to device level.  It provides also data per device for the last 6 hours (for older data you need to use Homey Insights). By zooming in you can identify the high energy consumers.

There are 3 methods by which Homey can grab the energy consumption of devices:

In addition to tracing energy consumers, Homey Energy provides an overview of the battery status of all battery-powered devices. Homey also lists the type of battery a device uses, to make it easy if a battery is due for replacement.

Click on the small battery icon in the right-hand upper corner in the main screen of Homey Energy and get to know: 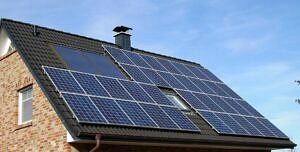 Be aware that this is only possible if the connected inverter is supported by Homey via one of the available apps available in the Homey App Store (search for example on ‘ solar’ ), see for example the Solar Panels App.

The Athom Homey website does not provide much information about Homey Energy:

Homey takes care of your privacy and system security: